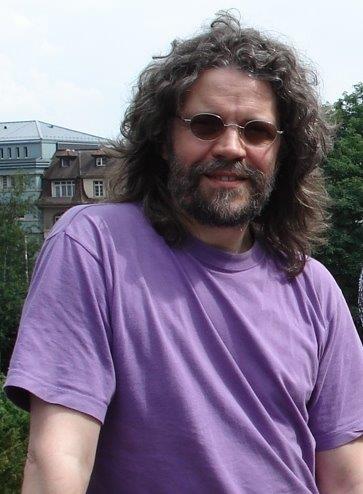 Franz Andres Morrissey is a linguist by training, a teacher by profession and a jack-of-all-trades – but sadly master-of-none – in his creative pursuits, which include music (trad. folk, Blues and Rock), writing (three pantos, several one-act plays, poems and songs) and cooking (Mediterranean, Indian, Cajun), not necessarily in this order. He is fascinated by language, by its sounds and its potency, he loves words and exploring ways in which they can be combined to the best effect in society, in academic and in artistic writing. His current interests are the sociolinguistics of (folk) song performance, the phonology of rock, story-telling and the stylistics of oral literature, and the future of minority languages and language minorities. Besides his teaching focus on various areas of linguistics he is responsible for workshops on creative writing, he has been moderating the first institutionalised creative writing workshop in Swiss tertiary education since 1995, and on staging texts, which gives students an opportunity to explore in performance textual material from classic drama to self-penned works. Lastly and more personally, he has never been known to spurn a good meal in pleasant company, to turn down an opportunity to perform, to miss out on reinforcing his reputation as the department’s worst punman and is, unsurprisingly, unquestioningly in favour of peace, love and siblinghood.